25px THIS PAGE IS NO LONGER USED. GO TO TECHNOLOGY FOR NEW TECH TIERS 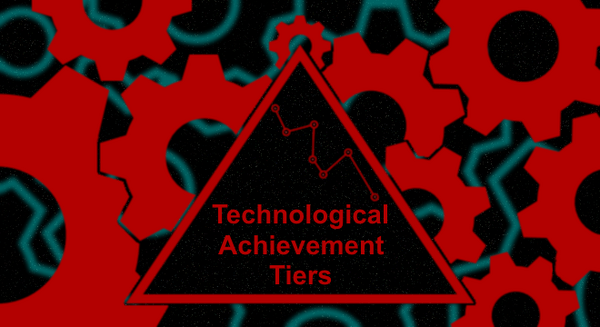 In the Stellar Adventures Project, factions are ranked under one of eight tiers based on their level of technology and sophistication. These tiers help determine their capabilities, including how many worlds and systems they may settle, and influence their society and the challenges it faces, such as access to nutrition and social or political divisions, and they range from preindustrial technology (tier 7) to atomic technology (tier 5) to the space-faring tiers (tiers 4 through 0).

25px This Tier is restricted by administrators on the following basis:

Restricted for administrative usage only due to immense power and strong likelihood for abuse.

Tier 0, or a perhaps ultimate level of space technology, was for some time merely theorized until the discovery of the so called "Precursors". This tier is characterized by races which span across multiple galaxies and by technology with incredible capabilities. Most intelligent life can barely begin to imagine ever reaching such a level of advancement. It is not known what may lay ahead of this tier, making it the highest.

25px This Tier is restricted by administrators on the following basis:

Access to this tier is restricted on a case by case basis, admin approval is necessary to officially reach this tier.

Tier 1, or an advanced level of space technology, is a period sparked by the mastering of faster than light technologies. While there are almost no examples of this tier, these races have empires which span the galaxy and have the capacity to travel to almost any corner of the Milky Way in a reasonable period of time. T1 races seem to have significant terraforming capabilities and advanced Dyson Spheres seem to be relatively simple to construct for them. This tier is presently a frontier for most intelligent life in the Milky Way, with the benefits and challenges involved in it still being explored by those very, very few on its edge.

'''Tier 2', or a fair level of space technology, is a period sparked by the unlocking of the secrets to faster than light technologies, including effective FTL transportation (such as warp) and FTL communications. Most T2 civilizations will expand to multiple systems and this tier will for many mark the first time that their civilization interacts with other intelligent life. With only a handful or two of examples of this tier in the Milky Way, it is difficult to generalize T2 civilizations, however it can be said that first contact between intelligent races seems to typically lead to conflict, possibly suggesting that peaceful races are less likely to advance to this tier, however more research is necessary to make any conclusions.

While most races in this tier have resolved the basic challenges they’ve faced for most of their existence, ensuring that food is abundant, medicine has advanced to eradicate most major disease, and most internal social and political divides have been resolved, many still ultimately face continuing challenges including ensuring stability across their interstellar empire, addressing any potential medical consequences associated with life in space and genetic manipulation, and ensuring abundant access to resources necessary to fuel their growth. Many T2 races have reasonable terraforming capabilities and basic Dyson Spheres might be possible for more resilient species. Some races will also, with varying degrees of success, begin to pursue the possibility of effective immortality, hoping to raise their lifespans enough to essentially end death. For most, however, this will prove to be a fool’s errand and for those who do succeed it will not likely be fully realized until Tier 1.

Most human factions are presently at this tier, having entered it in the 23rd century with the achieving of FTL travel and the initial colonization of Alpha Centauri, Barnard, and Epsilon Eridani.

'''Tier 3', or a moderate level of space technology, marks the first phase of a civilization’s development in which their race is no longer centralized on a single world. During this tier, races will spread out across the planets of their home system and some races will dispatch generational vessels to neighboring systems, gambling that there will be a suitable world to colonize there, though contact with these vessels will be lost perhaps permanently upon their exit from their home system. This period is characterized by advancement in transportation technology, construction methods, and life support technology.

Radio communications will be pushed to their limits by many races, some will still use chemical rockets for most of their time in this tier before beginning to develop more efficient means of transportation, and for most organic races this period will be marked by significant advancements in genetic manipulation, the eradication of most major disease, and many societies will see their average lifespan increase significantly. Many T3 races will have basic terraforming capabilities, being able to manipulate their environment through relatively crude means. While for some this tier will be something of a golden age, many T3 races face serious challenges as their expansion across several worlds creates various social, political, and economic challenges, challenges which are further complicated by their struggle to advance transportation and communication technologies quick enough to bridge the seemingly vast distance between the increasing number of inhabited worlds. While it is possible that later T3 races will begin to experiment with faster than light (FTL) technologies, they will not make any serious breakthroughs until the dawn of Tier 2.

An example of a Tier 2 society would be later 21st and 22nd century Sol, when the colonization of Mars and the resulting race to colonize Luna, Venus, and the Jovian worlds marked humanity’s first steps outside of its cradle.

'''Tier 4', or a basic level of space technology, is for the majority of civilizations the end of the road. This period is characteristically filled with intense conflict which threatens the fate of the T4 race as social, political, and economic issues from the home world remain unresolved as the civilization takes its early steps in space technology development. During this phase in their development, civilizations tend to focus on advancing medical, transportation, communication, and comfort technologies, setting up basic capabilities for space travel. This period is also typically marked by civilizations gaining a greater understanding of the universe and the space around their system as advancements are made in their ability to look out into the night sky and as new advancements in mathematics and science broaden their understanding of the basic nature of the universe. T4 civilizations will also face cultural and political developments as a result of the influence of technological and scientific advancements made during this period.

An example of a Tier 4 race would be mid-20th century Earth, when the launch of the first artificial satellite marked humanity’s approach to this tier.

'''Tier 5', or an atomic level of technology, is typically when a civilization begins to focus on clean energy production as well as begin to become more conscious of their world and the heavens above. For many races, this period is marked by instability, socio-political change, and conflict which threatens their very existence with the use of atomic weaponry. The potential dangers that come with the misuse of atomic energy and the serious consequences associated with the possibility of accidents involving atomic energy plants often leads to a range of social issues and can potentially lead to a global mentality of fear and paranoia if difficulties with atomic technology remain unresolved. During this phase of their development, some civilizations may either fall or wipe themselves out as the result of abuse or misuse of atomic energy or sheer incompetence in its use, though for a rare few this period can be a golden age of clean energy and social advancement. Atmospheric craft can be considered a hallmark of this tier, said technology often leading to short-scale space flight, setting the stage for Tier 4.

An example of a Tier 5 society would be 20th century Earth, with the detonation of the first atomic bomb during World War II signifying the start of this period in humanity’s development.

'''Tier 6', or an industrial level of technology, is typically the height of a civilization, the pinnacle if you may. Many societies improve environmental and medical understanding concurrently with mechanical and transportation advancement during this phase of their development and for more enlightened civilizations this phase is typically when it first becomes possible to address hunger for the general population while still allowing most citizens to pursue interests beyond food production, short of any social or political roadblocks to this possibility. For many civilizations, failure during this phase to embrace an effective golden age of new discovery and invention frequently leads to their demise, likely leading to their sliding back down into Tier 7, if not worse.

While Tier 7 societies and their agrarian and hunter-gatherer focus will typically remain stable, the T6 phase in a society’s development can be among the most perilous for them, with the growing strain of population growth and the mechanization of the means of food production leading to significant political, social, and economic pressures few civilizations manage to balance. Advancing beyond this stage often promises future advancement to the upper tiers.

An example of a Tier 6 society would be late-18th and 19th century Earth, when the advent of steam technology signified humanity’s progress into this tier.

'''Tier 7', or a preindustrial level of technology, is the most common and stable level of civilization in the universe, with limited environmental and artificial threats. T7 societies tend to be small and scattered, driven by subsistence farming, foraging, or hunter-gather needs. Technology tends to be limited to simple handmade tools and simplistic agrarian and hunting methods, though a rather broad understanding of planetary and solar mechanics isn’t uncommon.
Retrieved from "https://scifiminibuilders.fandom.com/wiki/Technological_Achievement_Tiers?oldid=16733"
Community content is available under CC-BY-SA unless otherwise noted.